Our original installation for this company was one of our Combi Systems and an overhead prep pump system, this was installed at their old facility near Chelmsford Essex. Having used the system for 8 months they told  us they had paid for the system in extra recovered fuel in just 6 months, they were processing in excess of 50 cars a day at that point.

The business expanded rapidly and they began to search for new premisses which they found in Rayleigh Essex earlier this year, they called us in to discuss what was needed and how they wanted to increase throughput even more to over 80 cars a day. We discussed our catwalk system which was still on the drawing board for one of our US customers who wanted a double processing system. We made some alterations and turned it into a single system and he gave us the go ahead to build it for them. 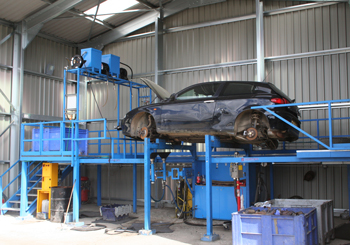 The idea of the system is that one man can process a vehicle in one place without having to handle the vehicle more that necessary so as to speed up production times even more. Essex Car Collections are using two men for the process and have de-pollution times down to a minimum, their average day sees over 80 vehicles processed through the system.

The equipment itself is still based around our Combi system with our overhead prep pump system to drain the engine bay of fluids. We have built a catwalk around the vehicle for access, but because vehicles are different sizes we have fitted floors which slide out to suit the length of each vehicle allowing access to the engine bay, the insides and the rear of the vehicle.

We would like to keep you up to date with our latest product information and special offers. Please enter your email address below.